"How many UK Sea Fish species have you caught in all of your years of angling?" Such an easy question to ask, but such a difficult question to answer.

When creating the What Fish UK App I found it fascinating that many of the fish species listed within are fish that I have not only not caught myself, in fact some are fish that I had never seen before and could not believe that they had at some point or another been caught from the waters surrounding Great Britain.


When it comes to the type of angler that makes it there goal in life to pursue multiple species I always wondered what it was that excited them about species hunting and not just fishing for the sake of fishing.

One such angler that has taken the pursuit of various species to another level is George Stavrakopoulos.

I first became aware of George through social media and after looking through pictures of a lifetime spent fishing it becomes quickly apparent that George is no stranger to species hunting. The team at What Fish UK managed to catch up with George recently and he was kind enough to shed some light on his angling journey.

Q: First off George, what part of the UK are you based in?

A: Hi I’m live in Minehead and I feel very lucky to do so. We have some very good fishing locations that people travel from far and wide to come and fish.

Q: Given that you are based in the Minehead area, where are your local sea fishing spots or do you prefer to travel?

A: I prefer to travel during the spring and summer months in search of species. Ilfracombe, Penzance, Torquay, Weymouth and Beer. All have all got a special place in my heart but locally I’d have to say Greenaligh, Bossington porlock and Dunster beach are all cracking marks within a stone’s throw. Picking the correct tides, time of year and conditions is key and the rewards can be brilliant when targeting specimen fish.

Q: I know that you will happily fish from the shore or boat but do you have a favourite, or do you favour one over the other at particular times of the year maybe?

A: I really enjoy the banter and close proximity of other anglers when fishing on a boat. It’s a lot easier to pick the 'men from the boys' when your 'all in the same boat' (pardon the pun). When you’re catching fish after fish and others aren’t, it really goes to show your doing something right and I think boat fishing with older anglers has helped me hone my skills.

Fishing from the shore is a whole different ball game, there are so many different variations angling styles from fishing rough and rugged reefs to clean beaches, lure fishing to 'LRF' the list goes on! In recent years I’ve really enjoyed lure fishing, it’s something I’m going to try and do as often as possible during the summer months. 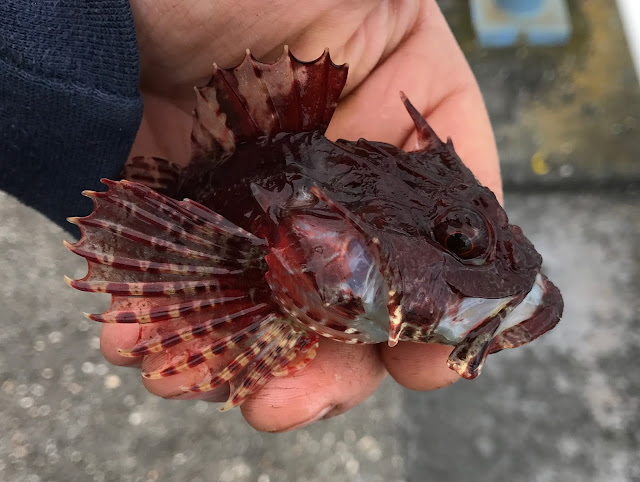 Q: I first found out about you on line through your specimen fish captures. I have seen you with many decent fish over the years. Is that how you started out your angling journey?


A: Absolutely it was always 'big baits, big hooks', with the realisation of the bigger fish not being as abundant as they used be, I’ve found myself down scaling a lot of gear in search of new species. My fishing targets aren’t about PBs any more they’re about new species and it’s highly addictive.

Q: Did you catch any notable specimens when you were fishing for them? 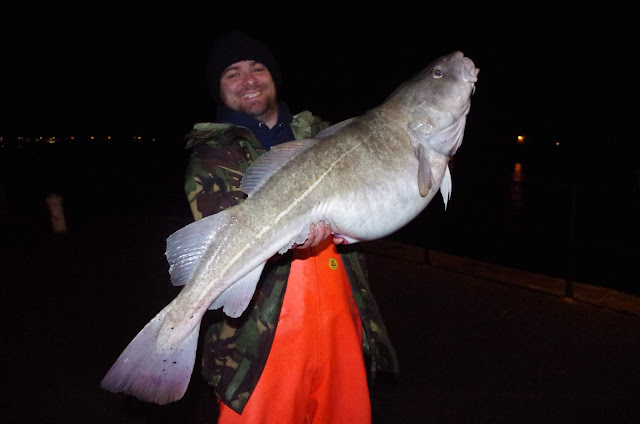 Q: Amazing fish! You now follow the specimen hunter path with your fishing, how did you get involved in this, was it something that you were introduced to?

A: A good friend of mine James Wigglesworth forced me to purchase a cheap 'LRF' rod and to join him on a new adventure of catching small fish speices. I always said to him "you won’t get me doing that Nano fishing". Next thing I knew I was loving it and from that day I’ve never looked back.

Q: Did it take a long time to adapt to the fascinating world of species hunting as opposed to landing the big ones?

A: It’s just another variation of angling. Learn what works when and where and you can’t really go too far wrong; it’s exciting not knowing what you could be on the end of that rod.

Q: How do you go about looking for a new species to target?

A: There’s no better feeling than finding a new Fishing mark, trying it, and succeeding. This year we had a run of Gilt-head Bream (Sparus aurata) in the upper reaches of the Bristol Channel something that’s never from my knowledge happened before. It shows that times are changing and more exotic species could be on route in the very near future.

Q: What would you say is one of your more memorable mini-species captures to date?

A: My Cornish sucker for sure! Me and a few friends of mine had good success in catching Connemarra clingfish at a couple of locations and I knew it was only going to be a matter of time before I feasted my eyes on it’s close cousin the Cornish sucker ! I was ecstatic to catch one as I’d never seen one before in the flesh. Cling fish are my favourite native mini species of fish.


Q: Have you ever actually sat down and counted up the number of species that you have caught and if so how many are you up to to date?

A: 50 in one year, that was hard work! And 68 in total. I think the possibilities are endless it’s just time work and money that gets in the way.

Q: I have to say that for me, one of my favourite pictures that you have allowed us to use on the APPs gallery is the Tadpole Fish (Raniceps raninus), did you stumble across this species or was there more to its capture than that?


A: I did some research in to the Tadpole fish. I found it’s largely found in deeper waters, I then decided it would be a good idea to target these weird but wonderful looking fish during night sessions in the middle of winter. It worked and I can say that seeing a Tadpole fish swimming in a bucked is majestic! They look prehistoric. They feel a bit like a Rockling, swim in a similar fashion to, but have a brightest white mouth when opened and really they’re all head and not a lot else. An Absolute pleasure to behold!


Q: I know you have been a keen user of the What Fish UK App in the past and when I informed you it was coming back I know you were looking forward to its re-release. What sections of the app did you use most in the past?

A: Finding location and clear descriptions of different fish species. I could spend hours looking at the mini species!

Q: As you are aware, we have many great detailed pictures of multiple species on the APP's gallery that you have given us to use and our users are thankful for that. One of the more popular pictures that you were involved in is of fish caught by your partner Hannah and a fish caught by her daughter Isla on the same trip. Can you tell our readers a bit about that amazing picture?

A: I’ve been with my partner Hannah for a couple of years now and from the get go she’s been keen to get involved with fishing. We often head to clear waters during the summer months in search of mini species. On this particular day I found myself gob-smacked when on consecutive drops they held up a Topknot and Leopard-spotted Goby. To most anglers this wouldn’t mean a lot but for me it was brilliant and they were so pleased! They say a picture says a thousand words! 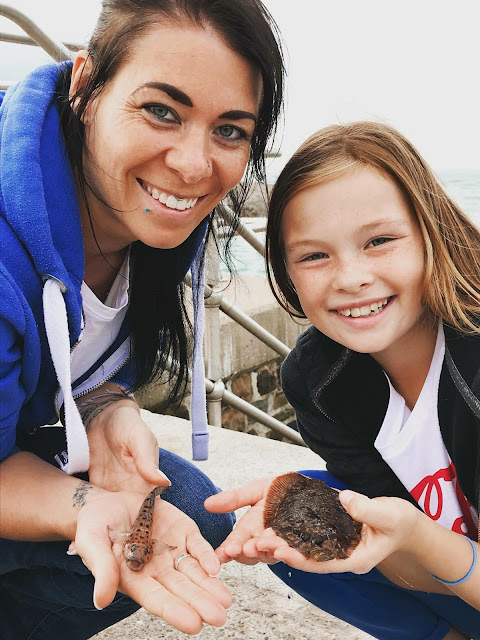 Q: The 'LRF' (Light Rock Fishing) style of fishing is a great one for all the family and I am introducing my 5 year old son Reuben to it this year. Do you ever go with any clubs or meetings with other mini species enthusiasts?

A: A few close friends of mine run a species challenge every year, there’s only maybe a dozen of us but it’s good to have a bit of competition and it keeps us all sharp and pushes us to do well. 'LRF' fishing or different forms of it are a brilliant way of introducing children in to fishing. I think Reuben is going to love it!

Q: As a former tackle shop owner I still remember the emergence of the LRF scene and its explosion into main-stream fishing. It was quite something! I think its chief benefits were the availability of great fishing spots that were easily accessible around the UKs coastline and the low cost of the basic tackle required. I also think that the amazing variety of fantastic looking fish being caught and publicised online are a big draw for the sport do you agree?

A: Absolutely!  I think catching loads of fish and new species is a big attraction for people. With the right tackle a 2 lb mullet on a light 'LRF' rod is much better fun than hauling Rays, Cod and some of the bigger fish species we have around our coast line in on heavy conventional beach rods. Don’t get me wrong, I do like to catch specimen fish, it’s just that I have so much more pleasure in the lighter art of fishing. 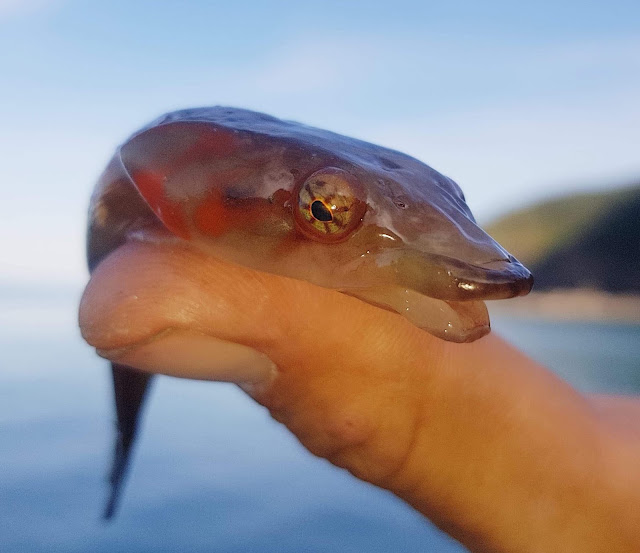 Q: 2019 is well under way, what are your angling plans this year? Are you targeting anything particularly special?

A: Giant Goby, Black-faced Blenny and Montagues Blenny are all fish I’d love, love, LOVE to get under my belt this year! Also looking forward to some local lure fishing for Bass. I’ve got a funny  that 2019 is going to be a good year.
I’ve enjoyed helping out and sharing some of my experiences with you. I hope your readers have enjoyed my insights and have a great 2019!

George, I would like to say a huge thank you for your time and I wish you all the best this year. Good luck with your angling and good luck with your target species! (I hope that our users will be able to see pictures of your new found species before the year is our!)

I hope you enjoyed this entry, I had a lot of fun putting it together and I have to say that George is a great guy and he really has contributed a huge variety of fish to our gallery form both his boat and shore angling adventures.

Take care folks, until the next time...

Posted by whatfishuk.blogspot at February 14, 2019