Another New Species For What Fish UK.

What do I mean by that statement?

Well in the beginning and on V1 of the App we decided to produce the App in a basic form just to get it out onto the market. What Fish UK came out with a few fish and some basic information just to see if it would be something that customers would be interested in?

After a good response we decided to take it very seriously and enlist professionals in each form of fishing to help us out with the correct modern rigs, baits and lures to help an angler catch a certain species of UK sea fish.
The fish recognition App suddenly turned into a very large sea fishing App and database.

Our roots have not been forgotten and the volume of fish on What Fish UK still remains unbeaten by any other app keeping us at number 1 spot in not only the UK but also in Europe. 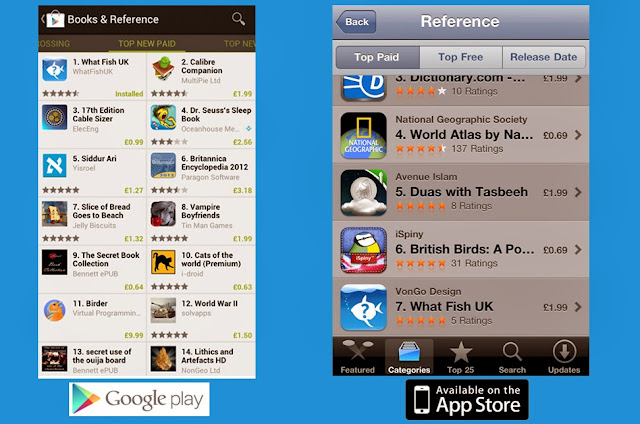 We are currently hard at work adding new species to the App for future release. As you are probably aware by now, we are not in the business of just adding random rare species to the App just to boost the numbers, we are very much in the mind of adding fish that we have proof have been caught/found around the UK’s coastline recently.
If you are an angler or are interested in marine fish you will no doubt share our fascination in all things fishy and when you are presented with a rare species found on our coastline we find it very interesting.

Allow me to introduce you to the newest member to be added to the What Fish UK App on the next update.
This fish was found by Mr Steve Perry washed up on the shoreline on Chesil Beach in Dorset.
The fish is commonly known as the Boarfish (AKA: Zulu Fish) (Scientific Name: Capros aper) 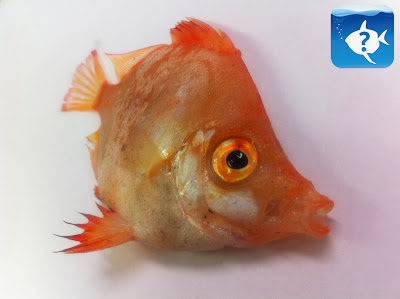 Steve said that he was walking to a fishing spot on Chesil and the red colour caught his eye.
The fish had obviously died and been washed up along the shore. We believe there are 11 species of Boarfish in the world and this particular one is of the most common to European waters.

It is a species of fish commonly found in between 100m-400m of water around the Eastern Atlantic, Western Norway, Skagerrak, Shetlands and Western Scotland and Senegal. They are also found in the Mediterranean. These Boarfish fish shoal in groups and can be found in depths of up to 700m.
Interestingly enough, the discovery of this species off of the Irish coast has now sparked a debate about whether Ireland's rate of climate change may be even more dramatic than first realised! Powerful stuff!

Here are some of the other species of Boarfish found around the world.

They act I suppose like a Mini-Wrasse and although not territorial (outside of breeding). Their shape has been described as being like a John Dory and with their thin body and long nose you can see where this has come from. The two species are not related and are not part of the same fish family. Boarfish like to live near the sea bed and their chosen food supply are small crustaceans. The fish is commonly seen between 8cm and 14cm long and a 16cm fish would be a very large specimen. This one measured 8cm nose to tail.

We are lucky enough to know Mr Steve Perry personally and he managed to bring the fish in to us to take a look at with our own eyes. (We should point out that Steve did find the fish dead and this is the only reason that he took it with him) 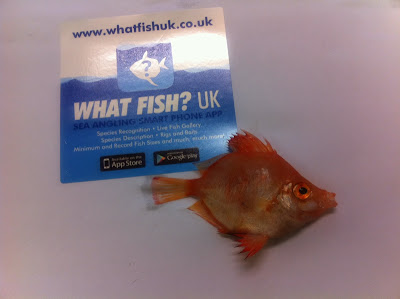 Finding and researching fish like this and bringing them to the attention of the British public via our App really drives the team at What Fish UK and it is this drive that will keep us adding new fish species to the App on every update free of charge.

Thank you for your continued support and we look forward to receiving more pictures and information for the App from interested parties.

And if they are selected you will see them on that chosen fishes gallery.

Many Thanks - Alan & Lee.
Posted by whatfishuk.blogspot at November 20, 2013 No comments:

A quick thank you from the What Fish UK Team.

The team at What Fish UK (Europe’s largest Sea Fishing Smartphone App) would like to thank our angling customers by offering you a FREE hard-wearing tackle box sticker. 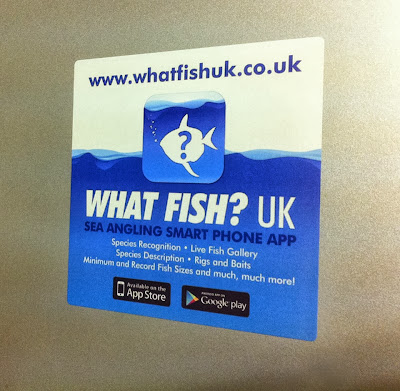 The sticker measures 4” X 4” and is perfect for your tackle box, seat box, lure box or it can even be applied to your boat!

To get your FREE sticker pack simply email your name and address to: whatfishukpromotions@gmail.com 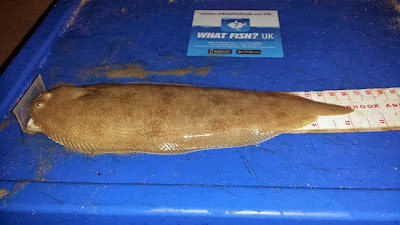 Don’t delay, get your sticker on the way today!!

(Your details will be held securely and then deleted immediately once your stickers have been sent out)
Posted by whatfishuk.blogspot at October 12, 2013 No comments:


To win £30 worth of Gemini Tackle and Leads all you need to do is answer this simple question!

What is the scientific name of the fish pictured below? 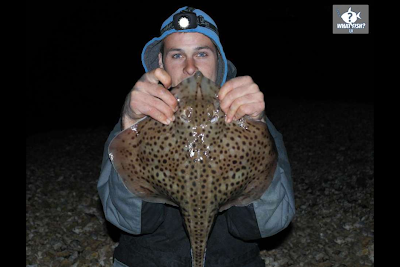 To enter simply email us with the correct answer making sure you include your name and address in the email.
We will pick the winner on the 1st October 2013.

(Your details will only be used for this competition and they will be deleted when the competition has finished.)

Our Email: whatfishuk@gmail.com
Posted by whatfishuk.blogspot at September 18, 2013 No comments:

Swordfish caught in the UK!

People will tell you that there are some species of fish that you will never ever see landed around the UK’s waters. And this is one of them caught in a Salmon net from the UK’s waters yesterday.
These are very rare to the UK coastline but it just goes to show that sometimes strange things do happen at sea.

This fish was caught on the morning of Wednesday August 22nd just off of Sunderland’s North East Tyneside Coast from the famous Souter Lighthouse by Ian Wakenshaw on the ‘Beverley Ann’, a catamaran that specialises in netting Wild Salmon and Sea Trout. 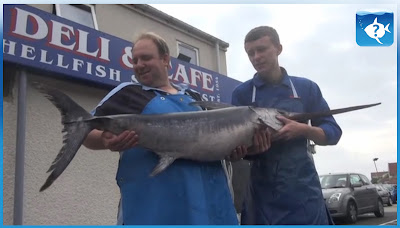 Fishmonger Rob Latimer now has this prize catch on his slab. It is the second Swordfish Rob has heard of being caught in North East waters in the last few years. When it comes to sea fish it is always worth noting that there are no fences out there, and quite often larger fish species will follow large shoals of smaller bait fish as they feed on them and this will occasionally take them way off course. 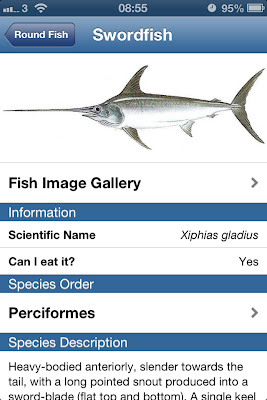 Swordfish are normally found in tropical climes of the Atlantic, Pacific and Indian Oceans where the water temperature is up around 18 °C (64 °F) and 22 °C (72 °F) so you can appreciate that it is very rare to see them stray into the cold North Sea. They are actually known for moving into colder water in the warmer months to feed, and among the Billfish the Swordfish does have the highest tolerance to temperature.
In fact on the What Fish UK ‘Preferred Territory’ map, we have placed the last reported sighting that we could find as Barry Island in Wales along the South West Coast of the UK, the nearest facing to the Swordfishes natural habitat.

Back in 2009 a Mr Jim Nettleton watched a group of gulls picking at something on the beach at Barry in Wales, on closer inspection he found a dead Swordfish washed up on the shore.
(Photograph by Jim Nettleton) 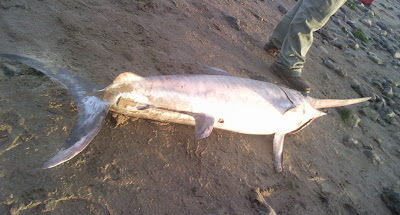 Swordfish were caught in the late 20th century in the waters off of Ireland but they have not been there in number for many years.
We have seen one report of Swordfish being caught (again in a net) up in Northumberland back in 2007 by a Mr Peter Dent (Photograph by Alan Charlton) This fish unfortunately suffered injuries and also had to be destroyed. 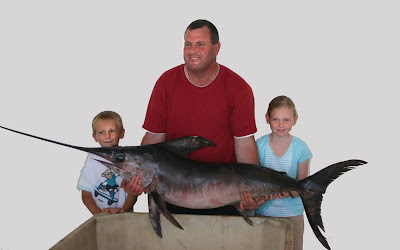 There have been a few other sightings of Swordfish around the UK from places such as Poole Harbour in Dorset and Teignmouth on the South Coast of Devon. A Jackie Hazel and Paul Fenton happened to be on board Tiger Charters dive vessel from Devon when they photographed a large fish in the water that swam past the boat a few times before disappearing. The fish was 3 metres in length including its stunning sword shaped snout, this would indicate a Swordfish from other conformed records. They managed to get this shot of the fish. 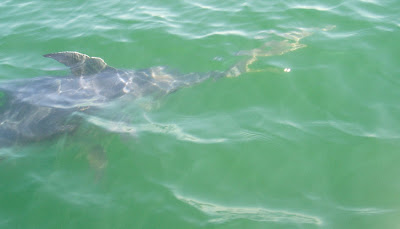 Posted by whatfishuk.blogspot at August 23, 2013 No comments: